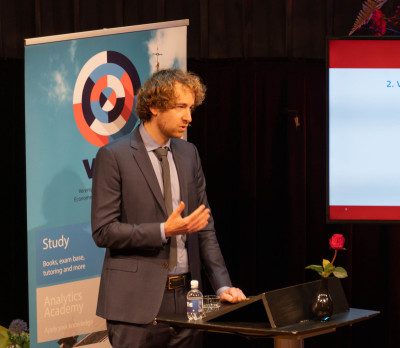 It is 8:30 on the 2nd of March, 2021, in the Royal Tropical Institute in Amsterdam. While usually by this time the room would be filled with the top of the Dutch Actuarial world for ‘het Actuariaatcongres’, an annual event organized by the VSAE, today there is only a small amount of people present. ‘3, 2, 1, and we’re live’, the director counts and Juliëtte, the chairman of the committee, kicks off the day.

This year’s Actuariaatcongres could obviously not be held the regular way. To make sure our participants were still able to earn their PE-points, the committee worked hard this year to set up an online variant of the congress. At the usual location, the KIT, the presentations were filmed and broadcasted live by media-company TSR. The participants could log into our own custom online environment to view the presentations and ask questions, that would appear on a question-board for the speaker.

Apart from the fact that this year’s congress was online, most things went like they usually do. Jeroen Breen, for example, was the chairman of the day and did it exquisitely as always. After Juliëtte’s opening speech, he welcomed the audience and introduced the theme of the day: ’Black Swans; (un)foreseen events’. This theme is obviously a result from planning a congress in times of a pandemic full of uncertainties, but it also raises the question: Was the pandemic an unforeseen event?

The first plenary speaker, Theo Kocken, is a true veteran in the field. His answer to this question is a very simple no. He showed us there is a clear distinction between complex and complicated. Something complicated, like manufacturing a car, can be comprehended and the risks involved have a probability distribution and can thus be quantified. Something complex, like traffic or the way humans think, has feedback loops. Results have an influence on the affection and thus the decision making, in an unpredictable way. Risks like Covid-19, or the financial crisis in 2007, might not be foreseen in our complicated models, but definitely imaginable. That’s why he advocates for more scenario-thinking, instead of fully relying on models.

Next up was Stephan van Stalborch. Designing the new pension-plan for the Netherlands, Stephan has made some long nights with people like Mark Rutte and Wouter Koolmees. In his talk, Stephan explained how the new system works, whilst showing what types of risks they take into account. He finished his talk with a poll. As actuary, he’ll be responsible for informing the new ministers on the possible next steps for the pension-plan. In his poll, he asked for suggestions for key points in his proposal that he could take to the Hague.

After the first two plenary sessions, it was time for the interactive sessions and lunch. These are elective sessions, a participant follows one out of the four possible sessions. More information on all four speakers of this round can be found on actuariaatcongres.nl. After this, everyone digitally gathered in the plenary session for Willem Peter de Ridder. Willem talked about digitization and artificial intelligence, and the increasing pace it has in getting influence in today’s society. How will this impact us, and more importantly, what is the role of actuaries in determining a strategy for this development?

Before the next round of interactive sessions and the second break, it was up to Maarten Gelderman, division director Supervisory Policy at De Nederlandsche Bank, to give a presentation. In his talk, Maarten talked about whether something is foreseen or unforeseen, or as he put it: is it a black swan or just an ostrich? There is a difference between known-knowns, unknown-knowns, known-unknowns and even unknown-unknowns. It is up to policymakers to address all four categories and to act upon it.

Next was a combination of a break and the three remaining interactive sessions, among which also the session hosted by the days main sponsor Deloitte. The final plenary presentation was given by Michel Vellekoop, professor in Actuarial Sciences at the UvA. In his talk, Michel imagined very improbable scenarios and what the role of actuaries is in analyzing these extreme risks.

After this, it was time for the last part of the day: The discussion panel. Four speakers of the day, Michel Vellekoop, Gisella van Vollenhoven, Pim van Diepen and Cameron Assman, were given some statements made throughout the day and shared their standpoints. The public was given a last chance to give discussion points and to ask questions and, after a thanks by the committee, the day was over.

The committee, the board, the speakers and our sponsors were all very content on the day. A really relevant theme that needed to be discussed, as said by the discussion panel. A week later, Theo Kocken actually mentioned the congress and its theme on his full-page article in the ‘Financieel Dagblad’ (https://fd.nl/opinie/1376476/verbetering-crisismanagement-begint-in-onderwijsgjc1ca8XDQ6Butm_medium=social&utm_source=whatsapp&utm_campaign=SHR_ARTT_20210310&utm_content=opinie).